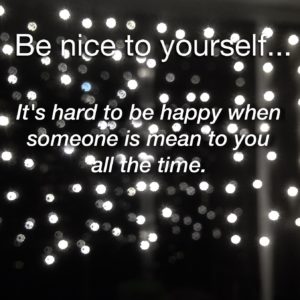 Pay attention to what your internal voice says next time you make a mistake, or something upsetting happens. Some people’s internal self-critic says “I’m so stupid, I can never get things right”. Other people have a case of the “shoulds”: “I should have known better, I should have picked up on that.” Identifying and becoming aware of your self-critical narrative is the first step to changing it.

2. Notice What Triggers Your Critic

Some people will have a self-critical response for many situations, while other people are triggered particularly by one aspect of life. Which situations awaken your self-critical voice?

The antidote to a self-critical voice is a self-compassionate voice. Try to think of something you could say to yourself other than “I should have …” or “that was so stupid.” To help you brainstorm, imagine what you would say to a child, or to someone you really love. Your voice would probably change to one of comfort and warmth; it might become lower and more soothing. You might say things like “it’s okay, everyone makes a mistake sometimes” or “you couldn’t have predicted that, you did the best you could”.

After traumatic experiences by "powerful others" P

Everyday is let’s talk day for us. Like with any

Note to self when feeling shame. 📝💡💜

A wonderful quote from @brenebrown . Being vulnera

Sue Johnson on our very human need for deep, emoti